Whew, what a year! I can't believe how many wonderful things have happened thus far, from my first ever TI5 experience in beautiful Seattle--I loved meeting all the amazing artists there and making new friends!--to a fun and crazy-spectacular SDCC.

Hands-down, one of the most exciting experiences I've had was working with the amazing Jessica Steele-Sanders and Chris Sanders on this fantastic new book: Rescue Sirens: The Search for the Atavist. 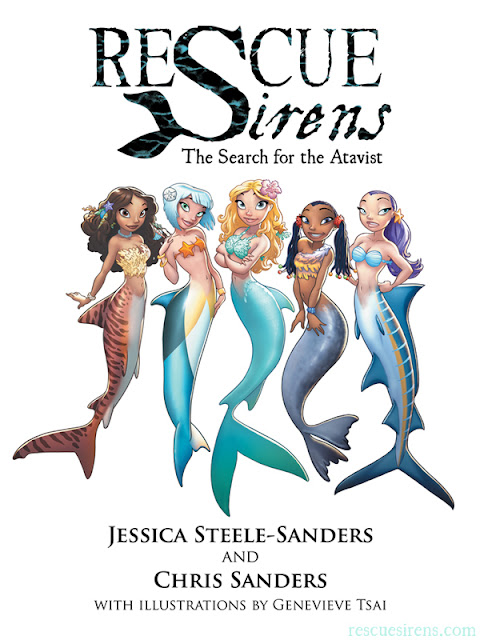 (above: cover illustration by Chris Sanders, colors by Edgar Delgado)
Jessica and Chris teamed up to build a world of in-depth histories behind mermaid culture and how it evolved and crept into human history and legend. They've concocted a mystical underwater city where a menagerie of mermaids thrive beyond human sight. And this first book revolves around a team of young mermaids who disguise themselves as lifeguards to live amongst humans, sworn to protect them.

It is a world rife with potential for limitless stories and new characters, with imaginative settings and dialogue so lively and believable you feel like you 'know' the characters; the world simply takes a life on its own. I'm certain if I read this book as a kid (though I'm definitely still a kid at heart), I'd instantly believe in mermaids and could never look at lifeguards the same again! I can easily see this being made into an animated series or feature film--in fact, Chris even storyboarded the entire intro for it, and from what he described, it sounds visually breathtaking! (Hopefully we'll get to see it someday!)

Chris did the original character designs above, of the five main mermaids (from left to right): Kelby, Maris, Nim, Pippa and Echo. They were initially black and white and later colored for the cover by the talented Edgar Delgado. Needless to say, I was immediately floored at seeing these for the first time and I honestly wasn't sure if I could do them justice! His drawings exhibited a perfect union of sexy, confident and diverse ladies in Chris' iconic and appealing style, with his impeccable attention to animal anatomy.

Chris worked on practically everything I grew up with and loved: he was the Creator, Writer, and Director of Disney's Lilo and Stitch; directed How to Train Your Dragon (and designed the adorable Toothless), as well as The Croods. He also worked on Mulan, The Lion King, Beauty and the Beast, and The Rescuers Down Under. So, like the thousands of others, I was a BIG fan! Every year I attended San Diego Comic Con, I would stop by Chris' booth to pick up any new sketchbooks or prints he had. I believe it was back in 2013 where I had left my booth for a moment on a break, and when I returned, my boyfriend Mike who was helping me man the booth, said that Chris Sanders came by and bought my California Girls print.

"OMG WHAT?!" I freaked out. "Are you serious!?! Please tell me you gave it to him for free!"
"He insisted on paying for it! He wanted you to sign it but you were gone and he had to go back to his booth."
"AAAH!!" I grabbed a copy of my sketchbook and signed one to him, then zoomed over to his booth to thank him profusely. I asked for a pic together. He and Jessica were so nice!! It was one of the unforgettable highlights for me that Comic Con.

Fast forward to this year, where I was on the train to work and I'm awe-struck, reading through an out-of-the-blue email from Jess who asked if I wanted to collaborate with her and Chris on Rescue Sirens. My heart skipped a beat reading her email and I was blushing and dumbfounded for the rest of the ride, replying to her message with hands shaking in excitement. I must have worn that smile for the rest of the week--nothing could ruin my day, haha!

Throughout the project Jess would often send me beautiful and vivid excerpts of passages from the manuscript as they finished it (I was drawing as they were writing, concurrently), and it painted so many possibilities in my head that I couldn't just settle on one idea. It got me excited to thumbnail out a few options. They always made me blush with their incredibly kind feedback, and their notes and refs were so organized, clear and sound it took all the guesswork out.

It was an unbelievably surreal and amazing experience for me and I'm grateful beyond words that they chose me as their illustrator! I mean it when I say they have been a dream to work with--both being such sweet, fun-loving (and funny!), talented, creatively inspiring, patient and gracious professionals... just simply all-around, wonderful human beings who treat me like a friend.

We were SO thrilled to celebrate the debut of Rescue Sirens at Comic Con this year! I helped at Chris' booth for a day (and at one point, even Edgar joined as well--it was really cool having the whole crew together!) and it's amazing and gratifying to see so many people excited about the book!

Thank you to everyone who came to visit and show your support, and also thanks to all of you who support and follow us online, helping to spread the Rescue Sirens luv on social media! ♥ It means a LOT!

We're all very proud of all the hard work we put into Rescue Sirens, so I hope you all get to check it out and enjoy! ^__^

Check out an article on Variety about the book!
http://variety.com/2015/biz/news/animation-writer-directer-chris-sanders-co-writes-mermaid-book-rescue-sirens-1201558655/

Hope to see y'all at CTN this year! Come find me at Table T-70, I'll be selling some new prints, which are also available on my Etsy Store! ^__^

Cheers and thanks again, everyone! Hope to update you with more exciting news soon!
~Genevieve
Kelby, tangled in a fishing net 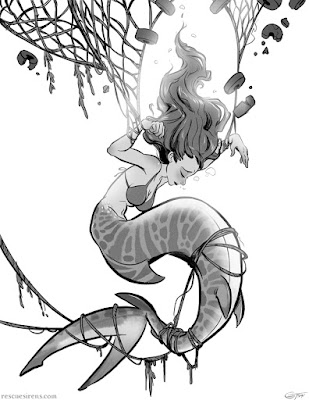 I felt the pose and acting was priority, so I thumbnailed her without the net. I was trying to get in her head to see what happened before she went unconscious; was she struggling and then gave up, or struggling and reaching out for help, or did she just pass out in mid-struggle? We all gravitated towards #6 (below, left to right). The way her body is twisted it felt like she was struggling and had abandoned hope, but she was still alive... 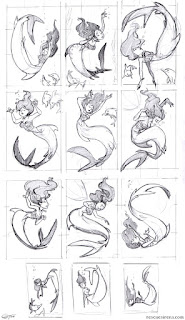 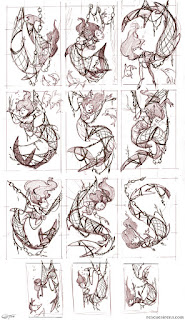 When I added the net later, I noticed it changed the composition a lot, creating busy negative shapes. It was a bit tricky to get the feeling that she was tangled in enough net without destroying the simple, flowing shape of her body. I wanted to keep most of the net away from her upper torso so it's a better read...

Kelby, seeing the ocean for the first time; Nim looks on... 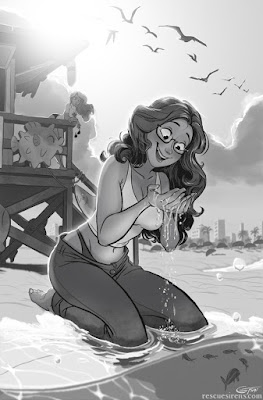 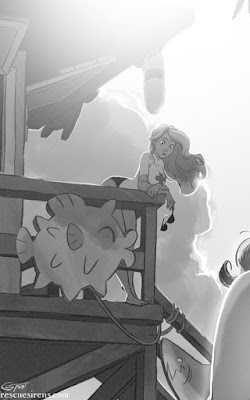 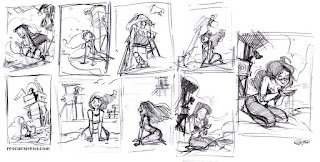 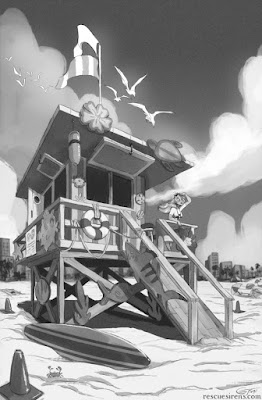 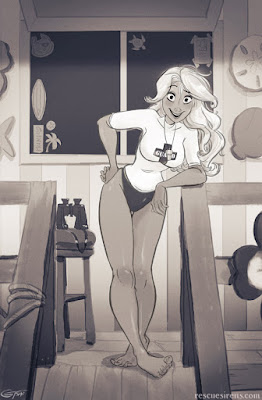 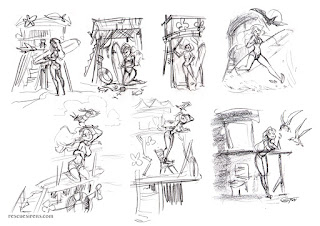 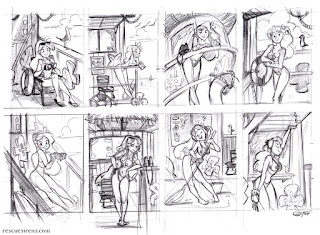 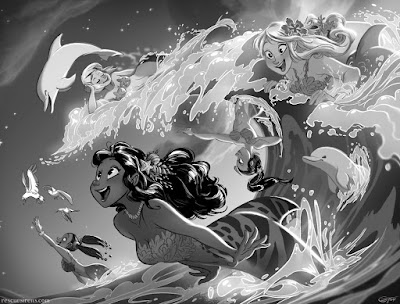 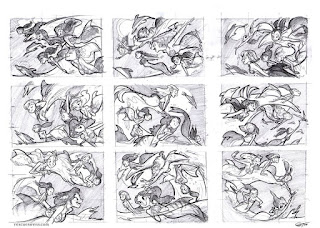 Nim and her mother, Clymene 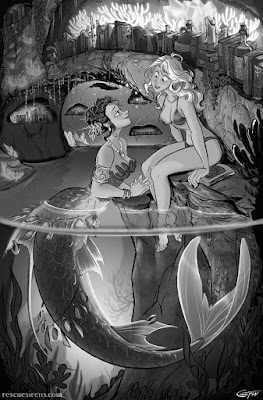 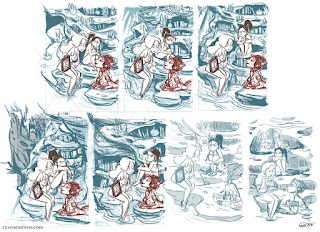 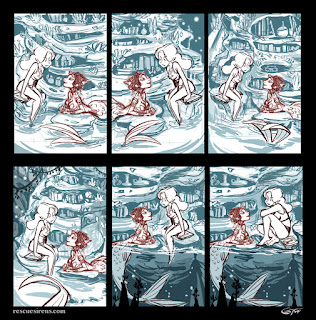 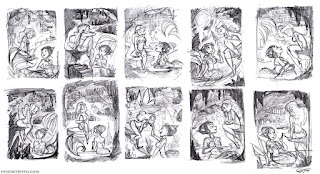 The mermaids reveal themselves at the Diving Belle 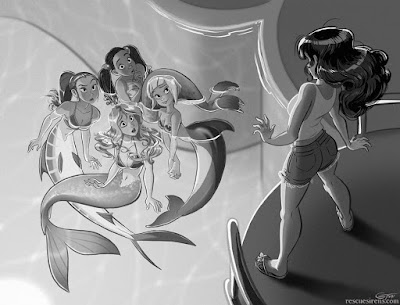 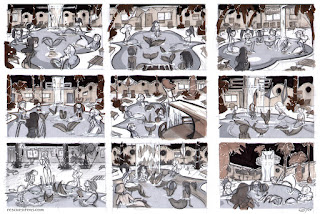 Initially, we were going for a shot that showed off more of the Diving Belle, the hotel where the mermaids reside.

However, the scene needed to convey the impact of the "big reveal," so we needed to focus more on the characters. Chris did a quick thumbnail which brilliantly solved the staging problem, so we could convey the dramatic reaction of the girls while implying the size and shape of the pool (which we decided looks like twin bells mirrored upon each other; a pun on the name of the hotel, which is already a pun in itself!). I did three thumbnails based on his thumbnail (above, right) to experiment with the poses and expressions of the mermaids.

Nim and Kelby bond after a rescue mission 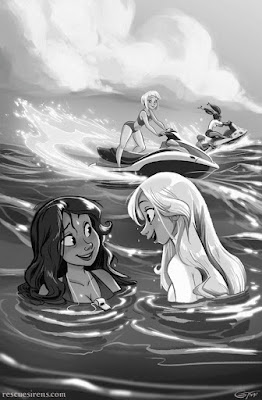 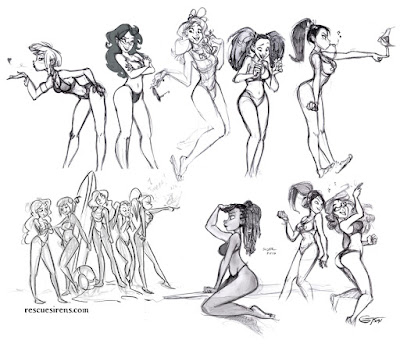 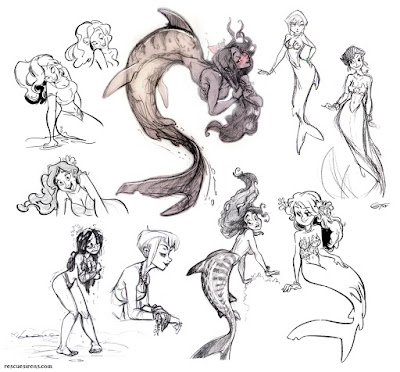 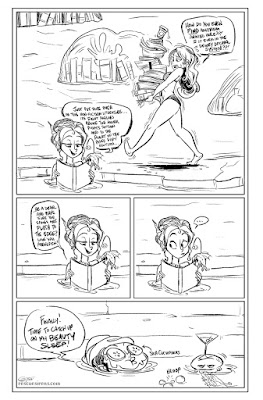 Posted by Genevieve Tsai at 3:16 PM

As always, looks good. Think I might get one.

Wow, they all look terrific! :) Thanks for posting them, it's always wonderful to see "process" stuff. So many times you only see finals online, and that doesn't give nearly the same level of insight!

This article is very good. We would like to leave a good article. To read more articles, click here >> เชลซี

The information you provided is very interesting. Thank you for the hardships
Tech news
IT news
IOS news
ANDROID news
Moblie news

This article is very good. We would like to leave a good article. To read more articles, click here >>>
Lotto
Lotto
how24u

This is my blog BACCARAT

This article is very good. We would like to leave a good article. To read more articles, click here
ทดลองบาคาร่าออนไลน์
ไก่ชนออนไลน์
ทีเด็ด สเต็ปมวย

The information you provided is very interesting. Thank you for the hardships.. เกตาเฟ่ VS เรอัล โซเซียดาด

Nice Information! I personally really appreciate your article. This is a great website. I will make sure that I stop back again. These are some really great tips! Another important note is to make sure you give completely specific instructions to your cleaning staffs.

This is my blog. Click here.
การเล่น บาคาร่า ผ่านเว็บคาสิโน


REVIEW FOR YOU Thank you!

update new item hair
how to

Welcome to the new world.

Welcome to the new world.