Hey Guys!
Here is an 11x17" commission I finished recently of Mai Shiranui from King of Fighters. I decided to do the latest version of Mai's outfit from the upcoming KoF XIII. I was almost about to put a Gen-An Shiranui chibi on her fan as an inside joke, hehe!
I'm also working on a digitally painted version; I'll keep you updated! ^__^
pencils 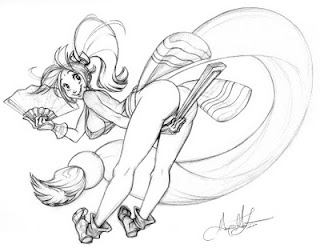 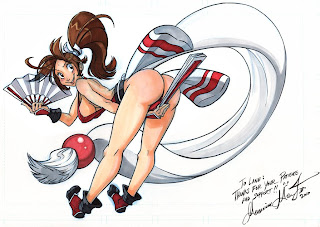 ~Genevieve
Posted by Genevieve Tsai at 10:52 AM 11 comments:

Wow, I can't wait for Tangled to come out!! The animation is so top notch! And btw, does this not look like a 3D version of Gordo!? So cute! All his mannerisms and expressions and everything. Totally my kinda style!! I LOVE it and I'm so excited to see it! ^__^

~Genevieve
Posted by Genevieve Tsai at 11:45 AM 3 comments:

I was very pleased to see that a couple days ago the Girls Drawin' Girls blog posted up an Artist Spotlight for me on their site here!! Yaay! ^__^

~Genevieve
Posted by Genevieve Tsai at 11:35 AM 5 comments:

Thanks for stopping by our booth at Fanime! I always have such a fun time; it's one of my three favorite conventions (the other two being San Diego Comic Con and Wondercon). I swore I wouldn't buy much in the Dealer's Room this year but I caved in when I saw some rare Gurren Lagann figures I had to get--most notably, the 14.5" Giga Drill Gurren Lagann statue! 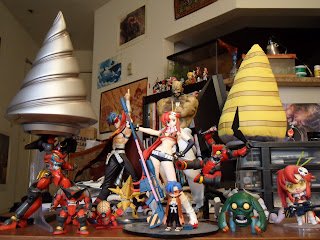 I wanted to thank Stephen immensely for giving me this kick-ass Hiyori statue I've always wanted, as well as Byron for giving me the rare Genshiken gashapon I needed to complete my set (he gave me Ohno and Tanaka, as well as an uncolored version of a sexy Ohno!). And my friend Evon, for the Samurai Champloo wallscroll which is now hanging on my kitchen wall. ^__^

I love visiting my friends at the Artist's Alley booths, and meeting new ones who both table and come by our IITS booth! I got to try out my friend Alex's latest version of the Skullgirls game and it was pure awesome! I love the design of the moves, and the animation and response time was very smooth.

I played some Super Street Fighter 4, Deathsmiles and BlazBlue: Continuum Shift while I was there. The arcades were packed 24 hours a day, and I mostly pumped coins into Street Fighter so long as my adrenaline fueled my furious rage for vengeance!! I even got to chat with Reuben Langdon, who was practicing for the tournament the next morning and of course, playing as the character he voiced, Ken Masters! The next day I got to match my Blanka against him in the tournament. He actually remembered me, which was so cool of him. "I remember you... from last night," he joked to the audience. "We had an intimate encounter at the arcades." LOL! ^__^

I am going to try and put together another cosplay costume for next year--Mike and I are planning on doing Monster Hunter. I'm trying to research the best way to do the armor, which is pretty complex. I'm really excited about it though!

I'm sorry I haven't been posting much art lately... I've been so busy working on numerous projects that haven't been released yet and I'm unable to post my art from them. It's really a bummer to wait! =P

I guess that means I need to do more stuff for myself instead of companies, right? I miss drawing just for myself!

On another note, remember that Midna/Link fan art I did for Alex? I found this rough thumbnail of the pic and it made me smile. *Sniff sniff!* XD 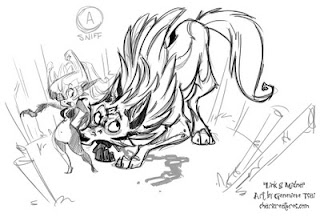 Posted by Genevieve Tsai at 9:02 AM 3 comments: