This year's Beasts & Beats Gallery, themed "Oh, No! Tarot!", will feature Tarot card art by over 30+ artists on Saturday, April 7th, 2012 @ Public Works SF. More details to come! What's also neat is that all of the art in the gallery will be made into an actual Tarot deck and be sold at the gallery!

My card was the 8th card in the Major Arcana: Strength. Instead of a maiden in white clasping a lion's jaws, I wanted to draw the maiden holding up a Cerberus in one hand with ease. Like many of the artists participating, I was inspired by Alphonse Mucha and wanted to give my illustration a similar feel. 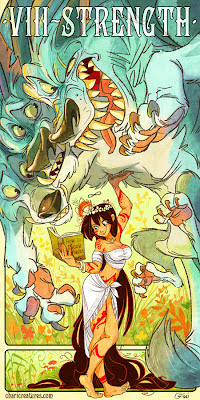 History of the Strength Card (as cited from Wikipedia):
Some frequent keywords are:
The design of this card is fairly constant across tarot decks. The key characters are that of a woman and a lion, with the woman looking calm and gentle, yet dominant over the lion. Many cards, including that of the Rider-Waite-Smith deck, have the woman clasping the lion's jaws. Another feature of the RWS deck is a lemniscate (a kind of geometric form) hovering over the woman's head. Other decks have the woman sitting upon the lion, or merely with one hand upon it. Some decks feature just one of the characters; flowers are often presented on this card.
Posted by Genevieve Tsai at 5:58 AM

Very Nice ! Love your style, and thanks for turning me on to the works of Alphonse Mucha. I've seen his work before, but now I have a name to put with it.

Wow, I love that. How are you Genevieve!?!

keep up ur EXCELLENT work, the wuffles!! LOVE ur artwork VERY much!!!!!

Marty - Thank you so much! And I'm glad that I could help you put a name to Mucha's art! He really is inspiring!
Glenn - Hey Glenn!! It's great to hear from you, and thanks so much for your comment! I'm doing well, just super busy! I'll email you--we need to catch up! ^__^
Oliver - Thank you so much, Oliver! It's SO great to hear from you! It's been far too long. You know while drawing this I was thinking back to when I was doing the Mucha assignment in your Figure Drawing class! ^__^
Sparky - Thanks a bunch, Sparky! Good to hear from you again! Hope to see you there!

Wow how have I missed your work?!! New fan!!

Thank you so much, Petra!!

I love your artwork for this, and the entire Tarot card concept! Would the deck of cards be for sale? (I know the even was months ago).

Thanks so much for your kind words! The curator of the gallery handled the printing of the deck, and unfortunately the deck is no longer for sale. I'm sorry... I'll keep you posted though if they're ever released in the future! ^__^

I though of Mucha when I saw this as well -- not because of the layout as much as for the color palette, which reminds me of one of his pieces. -- Nice work!

Ashima, one of the 5 greatest psychics in the world. She received a gift from the heavens when she was just a small child. Her aim is : to put her powers at the disposal of those with real difficulties and who call upon them to find harmony, love and happiness.

Change your Destiny for a much richer life. By grabbing the chance a lifetime, you could finally make your wildest dreams come true. Revelations await you to satisfy all your desires.

Fight the decrease in purchasing power; find a solution to your most serious problems and to all the daily worries that are ruining your life. Escape the negative vibrations that are stopping you living the wonderful life you deserve. Your free reading will set you on the right path: => Change your Destiny for a much richer life

With my most warm friendship,

I will be looking forward to your next post. Thank you
อัพเดทข่าวบันเทิงดาราดัง

I will be looking forward to your next post. Thank you
อัพเดทข่าวบันเทิงดาราดัง