Happy Friday!!Between all my side projects and preparing for San Diego Comic Con, I have a couple of things I’m excited to share with you (followed by a barrage of images)! First, I just launched a couple new shirt designs for the Dota 2 International Workshop T-Shirt Contest, of my favorite Dota 2 hero, Rizzrack the Timbersaw!! Please click the link below to check it out and vote! Thumbs up and comments would be most appreciated!! ^__^ 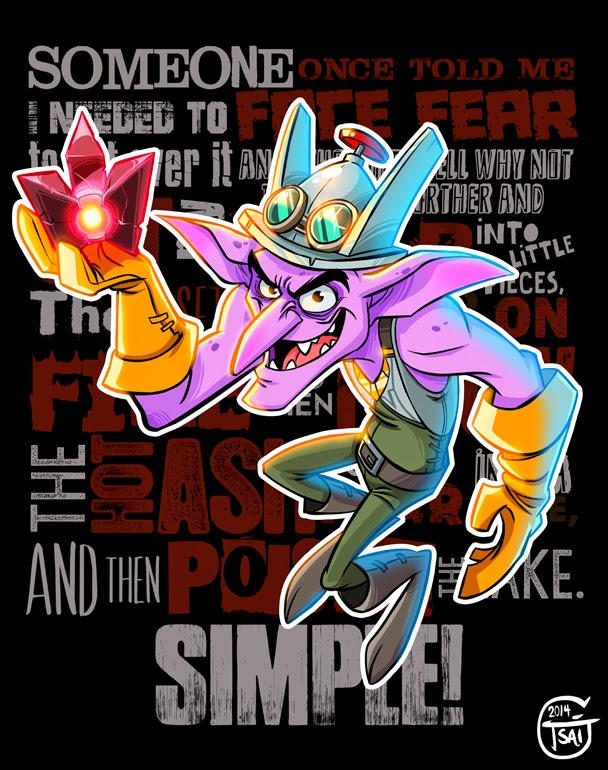 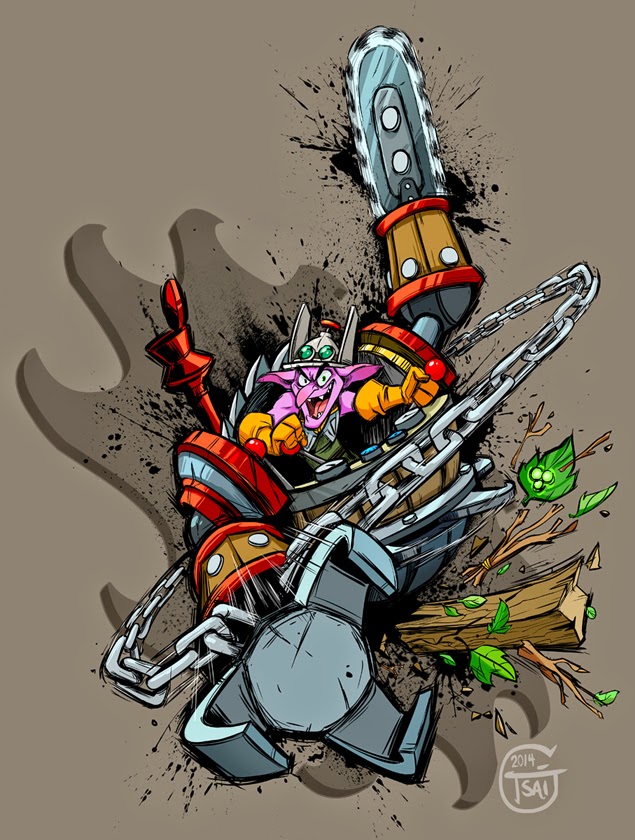 Secondly, last Christmas I commissioned an incredibly talented artist, Shoulong Tian, to do this AMAZING Timbersaw statue for me. When I saw his Alchemist sculpture I was totally blown away and instantly I knew he would be perfect to model my Timber! He was such a pleasure to work with and is a master of his craft! Every update he sent me of his work in progress was simply jaw-dropping and he knows I just about exhausted every synonym for “AWESOME” in the book when reacting to it! XD 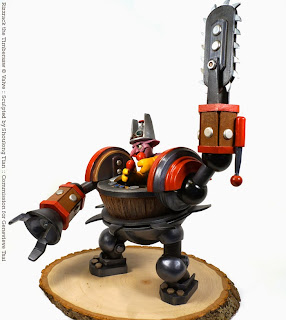 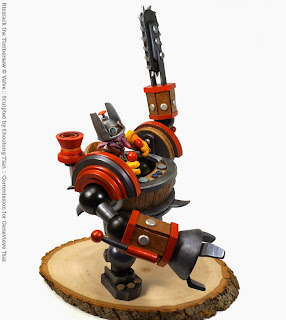 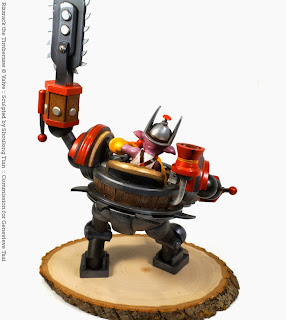 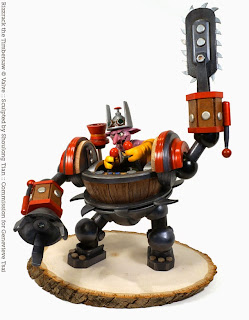 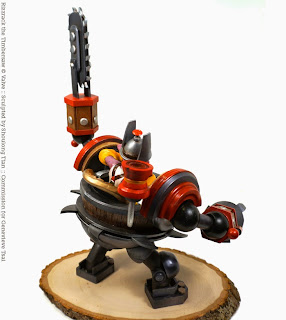 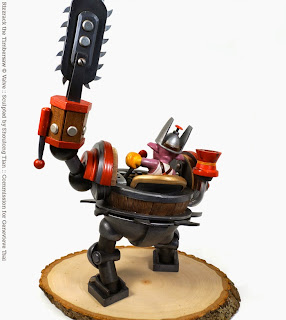 He created the main body out of Super Sculpey and hand cut wood, plastic and metal pieces to add to the sculpt. Afterwards, he casts it in resin, sands and hand paints every little detail!! I’m seriously convinced this is the best Timbersaw sculpt that is and ever will be. XD I mean, LOOK at the little details he put in the textures to make it look like wood and brushed metal; the little dials and bolts; the amazing construction of the sawblades, claw and chainsaw… and just look at how freakin’ adorable that Rizzrack is!! @w@; He’s modeled perfectly, from the buckle on his suspenders, to the valve on his helmet. He’s even got the different-colored eyes that I requested!

Needless to say, I was SO grateful for all the time and effort he spent on this statue. I loved it and I was so impressed!!

Shoulong is a student at Ringling and is starting an internship at Hasbro next week! Shoot him a congratulations and check out more of Shoulong’s work here!
http://www.behance.net/Shoulongtian
http://shoulongtian.blogspot.com/
http://shoulongtian.tumblr.com/
I wanted to give a shout out to my good friend Jody, who took time to do a photoshoot of the sculpture with his really nice cam—you’re super pro dude, thanks so much! ^__^ I couldn’t have gotten these nice shots without your help!
~ ~ ~
Below are some rough frames of one of the many animations I’ve been working on, based on Rizzrack’s response when meeting Pudge as an ally. I totally recommend listening to the actual soundclip below! 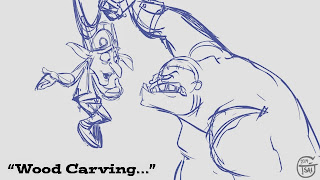 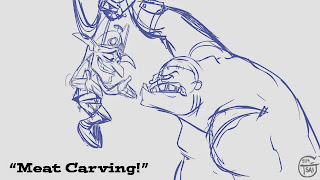 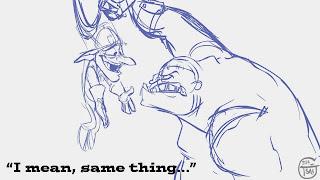 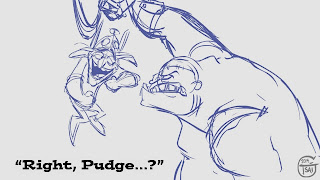 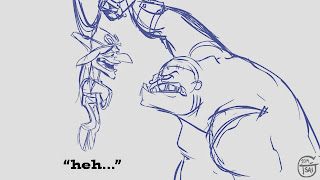 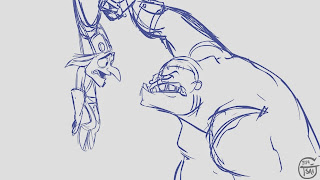 ~ ~ ~
So why Timbersaw? I admit, I’ve been crazy in love with Timbersaw the moment I played him and heard his hilarious dialogue set (I LOVE his voice acting!); he’s such a fun hero with a great backstory and quirky personality. In game, you better believe I’m going Timber 100% of the time. It might be a little (a lot?) weird but my obsession has got me wanting to have ALL THE THINGS Timbersaw-related! I’ve made sketches, animations, and fanfics and found any reason to draw him on random things—napkins, the dirt on my car windshield, shower steam (TMI?). My current desktop/phone/laptop wallpaper/ringtone, mousepad, luggage tag, shirts—yes, my friend Steph made me an “I love Rizzrack” shirt for my birthday! XD—are all littered with Timbersaw. And not surprisingly, I’ve also got a thing for goblins… Warhammer miniatures, WoW characters, etc… GIFF TECHIES ༼ つ ◕_◕ ༽つ. I even modified a Pathfinder goblin plush my friend gave me to look a little like Rizz—whoa… sorry, I’m sure all of you are either going TL;DR or WTF??! so I’m gonna stop there… 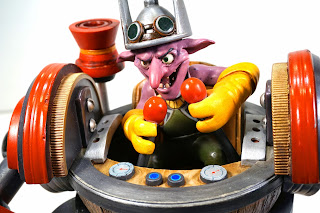 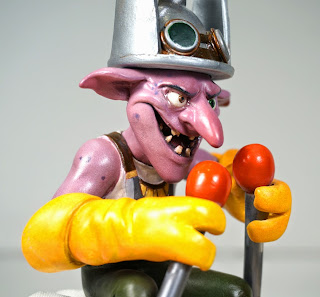 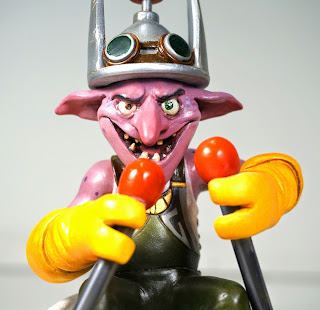 Under the chimney, Shoulong signed it: “First cast for Genevieve Tsai” Yeeee! ^__^

(And a wild Woody appears!)

Below are some WIP shots Shoulong took after making the resin cast—I love the shot next to his Alchemist! 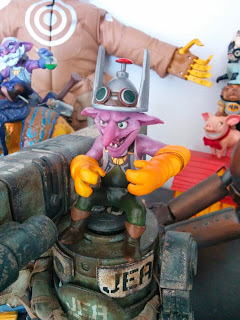 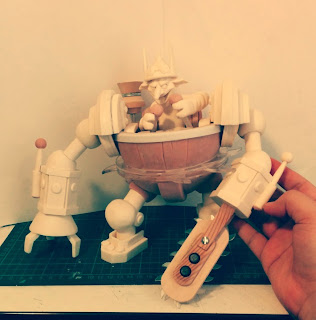 When I first commissioned Shoulong I offered him some sketches and screenshots I took for reference and direction. I painted over some edits to Rizzrack’s face and expression and gave him multicolored pupils just to add more of that crazed look. XD Shoulong really knocked it out of the ballpark! 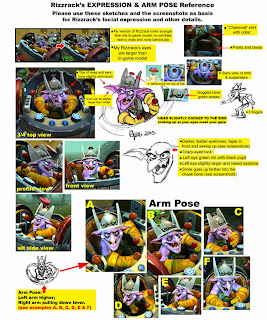 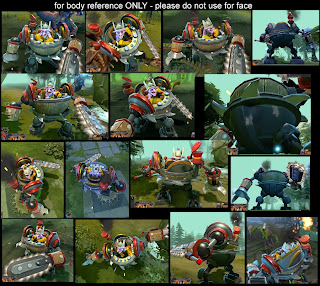 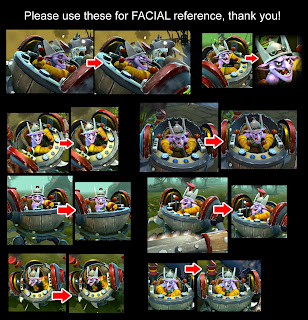 Below, a badass commish I got from Chris Copeland at CTN last year!! Thanks again, Chris!! Check out his killer stuff here! http://chriscopelandart.tumblr.com/

I threw in a Lich. With hella Ren & Stimpy eyes. “NUM-NUMS!” 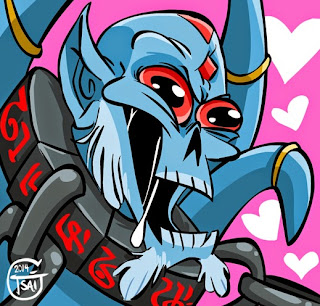 Thanks again for reading, especially if you’ve made it this far!

And please don’t forget to check out my design in the Dota Workshop!
http://steamcommunity.com/sharedfiles/filedetails/?id=258012679
~Genevieve
Posted by Genevieve Tsai at 2:41 PM