Some League of Legends Fanart to Start the New Year!

I am very excited to share some projects I've been working on in the past year. I have had the immense honor of working on some Riot-sponsored fanart for the game "League of Legends." I was asked to depict the Champions in my own style, but more importantly, the illustrations would take a different approach to introducing the Champions than their current splash screens by having the characters interact and show more of their back story and personality. I had a ton of fun working on these! 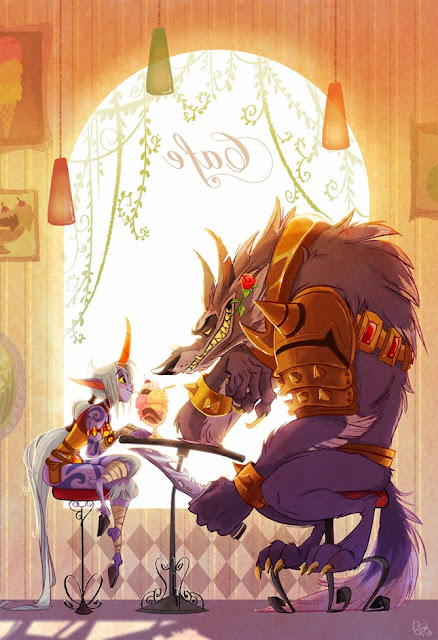 I wanted to show a lighthearted take on the relationship between the celestial Soraka and Warwick, who devised an elaborate scheme to deceive and cut out her heart, in order to obtain a formula that would grant him incredible strength. (Technically, he wasn't a werewolf at the time he was carrying out his plan, but I thought it'd be more fun to draw him in this form.) 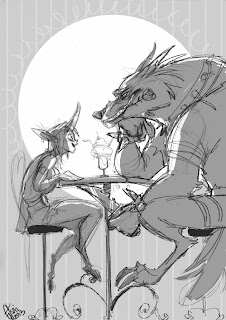 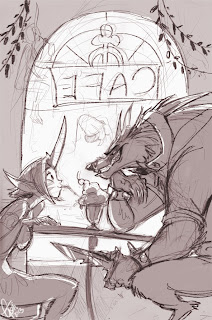 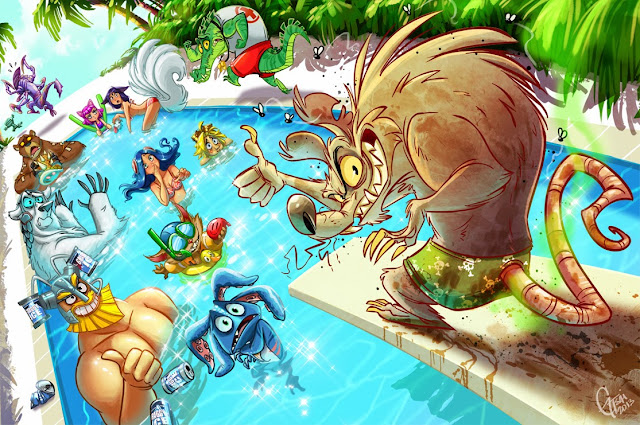 Twitch was one of the first Champions I played and I always thought he was funny. In my early sketches I wanted to do a scene with Twitch bathing in the sewers, or the horrified reaction of his friends as he's about to jump into a pool with them. 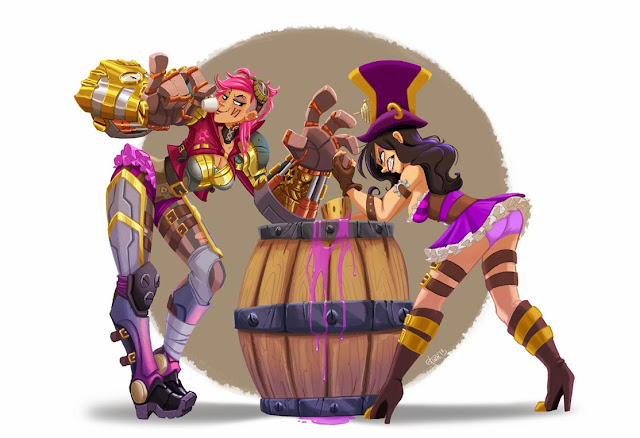 After trying out a few humorous images that involved the ex-criminal Vi and her now crime fighting comrade, Caitlyn, I settled on a simple arm-wrestling scene on a barrel of Gragas’s ale, throwing in her personal taunt to Caitlyn, using the teacup: “Care for a spot of tea? Or maybe a spot of punch in the face!” 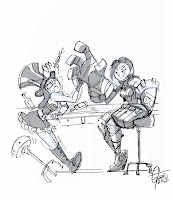 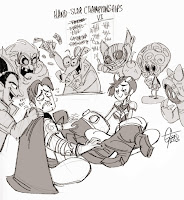 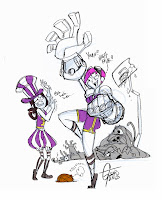 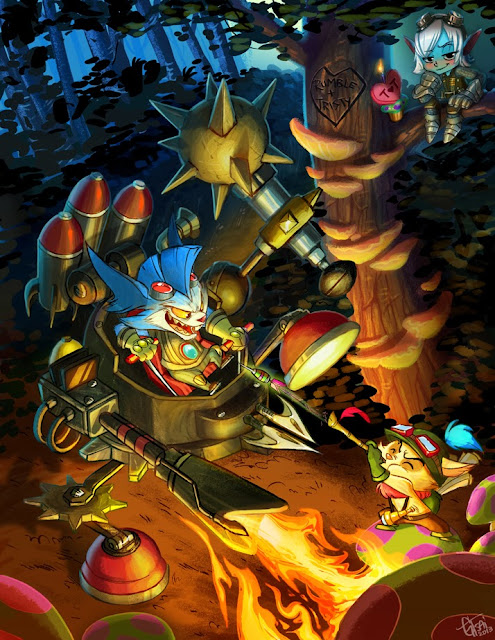 I titled this "Love and War" as I wanted to play on the (sort of) love triangle between Rumble, Tristy and Teemo; Teemo had given Tristy a personalized cupcake (Yordles can’t resist cupcakes…) while Rumble had carved their names into a tree... the two fight for Tristy's love while she looks on. 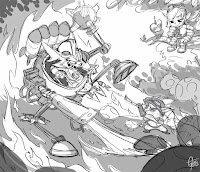 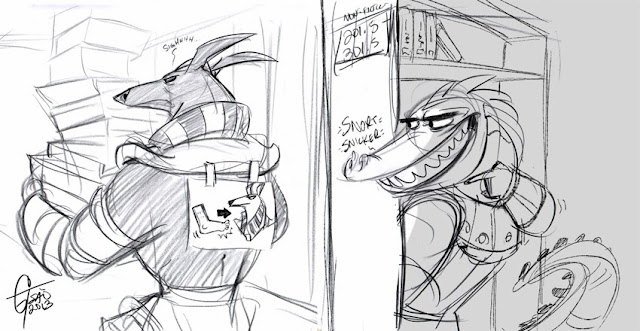 Nasus was another one of my favorite Champions. Although I didn't end up finalizing these, I played with a number of lighthearted ideas involving Nasus's early days putting up with his brother, Renekton, in the Great Library.

Ziggs & Heimerdinger
Here I wanted to tell Ziggs' backstory on how he used his Hexplosives to blow up the prison cell and free the professors of the Yordle Academy of Science & Progress. Heimerdinger, one of the captives, was eternally grateful and finally gave Ziggs the recognition he deserved and craved. 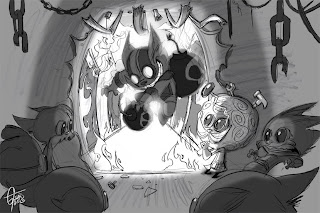 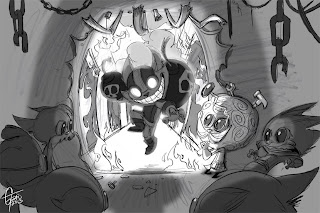 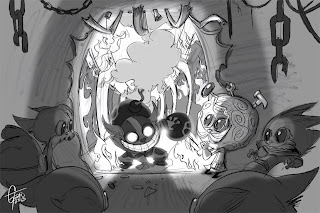 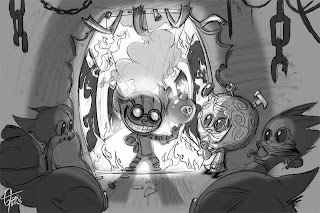 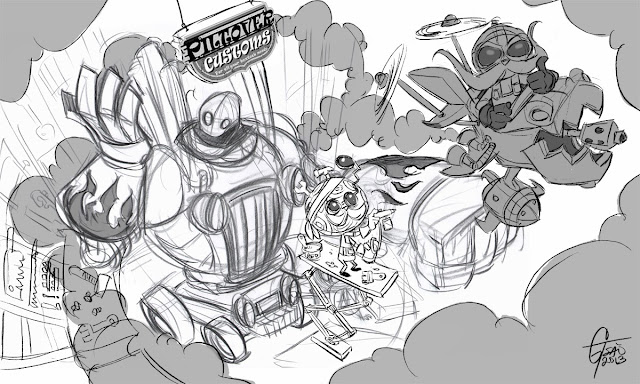 Someday I want to finish this one... I really liked Blitzcrank's alternate skin, Piltover Blitzcrank, and wanted to draw Heimerdinger and Corky modding Blitzcrank in their Piltover Customs shop. 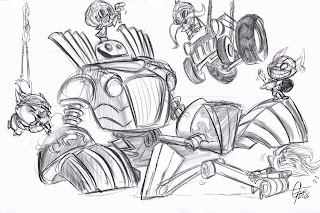 Hope you guys enjoy! I’ll be updating with more images tomorrow. ^__^ See you next year!!
~Genevieve
Posted by Genevieve Tsai at 10:48 PM

Thanks for sharing your art!

Thank you so much, Leslie! It's great to hear from you! I still love that moose print you gave me on our trade. ^_^ Hope to see you at SDCC again!

Toy Joy - Haha, aww! Thank YOU for checking out my blog and the kind compliment!

Do you feel as tho disney has had some inspiration on your work? I just get that from your work, which in my opinion is a good thing. Very impressive!

Just amazing, you're really good at this!

These are awesome!!! You have to finish that last Nasus & Renekton one! It'd buy a print of that in colour :D

OMG!! Awesome Stuff.
What program do you use to do this art's?

Never stop this awesome madness-- I can't believe how much character you manage to squeeze into each champ!

You're style is spectacular and and it makes me wish that beyond all hope Disney somehow picks up movie rights to a LoL animated feature! xD

I really like the Soraka/Warwick one, since I jokingly ship the two. Warwick's formula requires the heart of a celestial being and I find it amusing if he obtains it from Soraka willingly via love in the figurative sense a la Stardust.

These are fantastic! I used to play Twitch a lot so the pool one is my fav. (Olaf's expression is too good.)

I am speechless, and moved beyond words at all the generous and kind feedback from everyone!! You guys are wonderful. Thank you very much, it makes me so happy!

To answer some of your questions:
Anonymous - Thank you! Oh yes, I definitely feel that Disney has made a huge impact in my life and my style, as you can see. I grew up loving Disney and Don Bluth films as a kid, and later in my life, anime, Franco-Belgian/European comics and many, many other artists/artist friends have inspired me along the way! I appreciate that you feel it is a good thing!

liamsmartguy - Thank you so much, I hope to finish it or perhaps do a new one of Renekton/Nasus someday!

(And as a side note, if you or -anyone- has suggestions as to what they'd like to see, I am always open to hear! ^_^)

Marco Jota - Thank you! I draw it all on paper and then take it into Photoshop to finalize.

TastyPhox - Thanks so much! Wow, that would be incredible! I've always wished for a full-length LoL animated feature, even if it wasn't made by Disney. I just hope Blur makes one someday--their cinematics/trailers are amazing!!

Anonymous - Interesting! I hadn't thought of Stardust before, but now that you mentioned it, I like that twist of obtaining Soraka's heart in a figurative take.

Steven - Haha, glad to meet another Twitch fan! I'm glad you like Olaf's expression, too, hehe! ^__^

I love all of this you Rock please give us more!

Oh for a suggestion I suggest Zed and Shen. Maybe the point where Shens father asks Zed to return since that is a moment thats not covered very often. Maybe forshadowing Zed eventually killing Shens father as hes trying to welcome him into his arms. Idk could be a cool piece but you are the creative artist not I =D

This is easily some of the best fan art I've seen for League of Legends, great job.

Thank you for following my blog แทงบอล | UFABET | สล็อต

This article is very useful. Thank you for my article.
ไก่ชน

I will be looking forward to your next post. Thank you
food and health