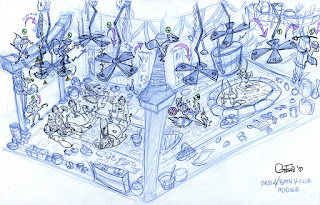 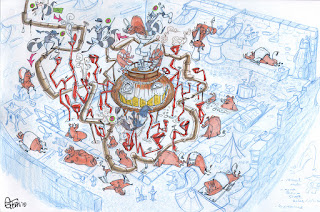 These top two concepts show an idea of what could be the gameplay flow of the bath house, and how Sly could sneak about along the pipes and ceiling fans to get around the guards. My favorite thing when drawing these concepts was showing all the fun expressions and things each boar guard was doing (and drawing all those funny butts lol). XD
~~~ 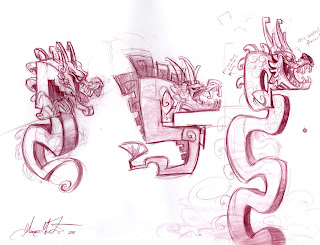 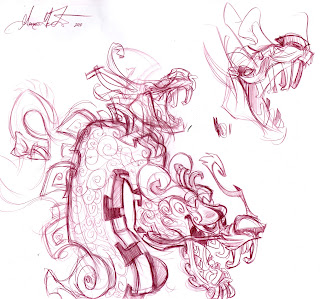 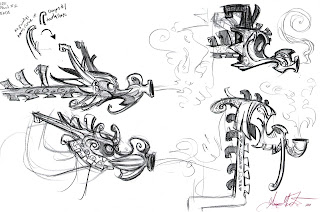 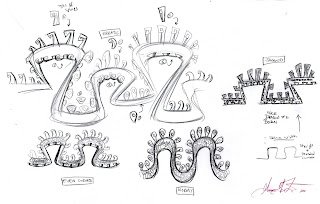 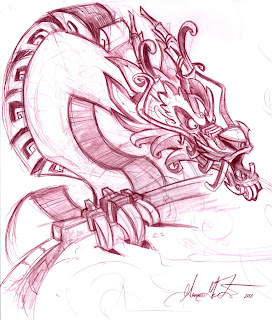 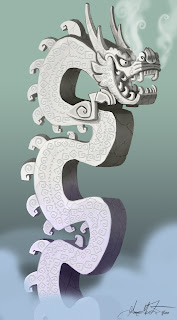 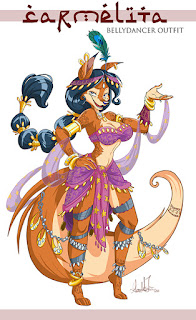 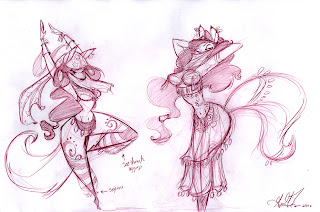 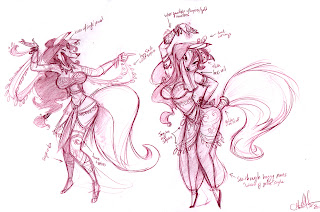 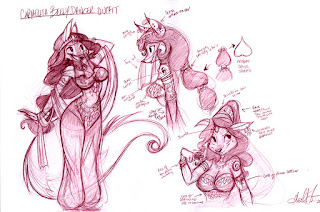 “Bentley… you owe me BIG time for this one…” LOL! Just wanted to share my concepts for Carmelita’s Belly Dancer outfit. 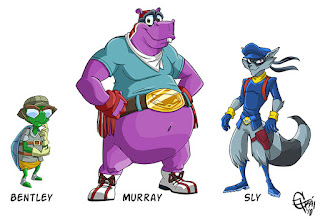 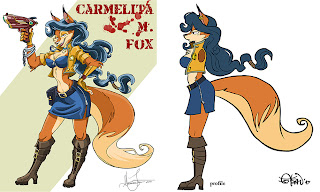 I wanna give a huge shout out to my friends at Ghostbot; their animators did an amazing, kickass job with the Flash cutscenes, it’s by far one of the coolest things to look forward to in the Sly 4 game, IMHO! I worked on many of the character model sheets/turnarounds and backgrounds for the Flash cinematics, translating and redesigning the characters into a more comic book, 2D cel-shaded style. I also designed a young version of Salim at one point!
~~~

These boards I did were originally going to be a tutorial for setting up the remote for PS Move at the beginning of the Sly Collection Minigames. He’s so happy! XD~~~ 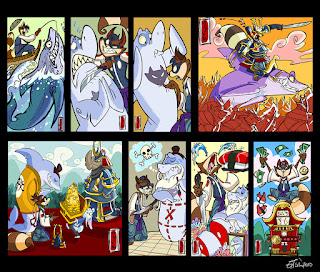 Here’s a fun (and weird) one! In the Japan level Sushi House, you can find these various banners and murals hanging on the walls and structures. Because they were just background pieces that might not be noticed at first glance, I had the freedom to play with the story a little. ^__^ I wanted to tell a silly, random story of how Rioichi started his sushi house (read left to right, top to bottom).


1. Rioichi was on a fishing trip one day and caught a giant, ferocious Great White shark.
2. He was about to kill the shark but it pleaded for its life.
3. That’s when Rioichi noticed a mysterious mark of the Cooper Clan on the shark’s chest (perhaps he was a fan? ;P).
4. Rioichi spared his life and in return the shark swore loyalty to Rioichi and served as his mount at war.
5. They were victorious together and were graciously rewarded by the Emperor.
6. As years passed, the shark grew too old to fight, and knowing of Rioichi’s dreams to begin a sushi house, the shark asked Rioichi to honorably sacrifice his fishy friend and use him to start his sushi restaurant. (He even drew dotted lines on where to cut the choice meats.)
7. At the shark’s funeral it was a bittersweet end; Rioichi wept for his friend, but he also produced the finest, sweetest, most succulent Great White Shark sashimi.
8. Rioichi builds his famous sushi house. Now he’s BALLER. THE END.~~~ 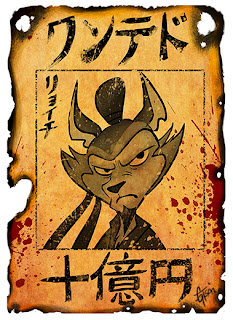 A Rioichi wanted poster (for assisted suicide? LOL). You can find this poster stuck on the posts of the sushi house. 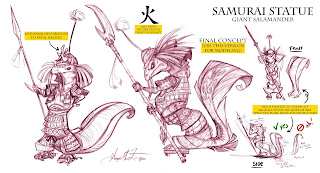 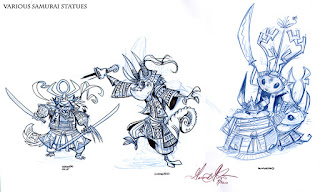 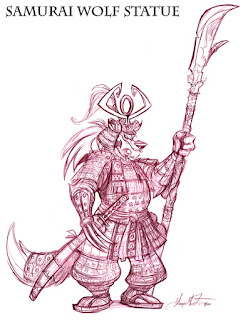 Some statues you can find in the Japan level.
~Genevieve
Posted by Genevieve Tsai at 4:07 PM

As usual, more amazing work. I'm already having fun visualizing playing though the bath house that way. Guess I'll buy the game and do it for real.

I love dragons, all kinds of dragons and yours is no exception. The sketch in red definite shows it to be a vibrant creature. I can see Sly running along that giant thing's back while it tries to roast him (and possibly itself with it's fiery breath). I'm just guessing of course.

I like the banners/murals of Rioichi and the shark. The story you can up for them is funny as well. Those samurai sketches are awesome as well. I love the bunnies.

So, are you planning to release any of your game work in a collection (Hint: like For the Love of Lines)? Just wondering.

You did awesome work on Sly 4. Thanks for these posts.

Stunning! I love all! And thanks for your tumblr ;)

can you please post more character art from thieves in time?

can you post artwork of penelope from thieves in time?

A far sexier assignment for Carmelita than her previous undercover job:

These are absolutely awesome! Love the little story for Riochi and the shark. Will we ever get the chance to see the art of those geisha banners?

Rachel - Thank you very much for your kind words!
Sparky - As always, I appreciate your wonderful and thoughtful comments! Thank you so, so much! I'm very happy you are enjoying both the art and the stories I've come up with, and you notice all the details! I am going to release another sketchbook eventually, when I get a few other projects cleared for public use. I can't tell you how badly I wish I could post the work from the other exciting projects I've been working on! But we'll have to wait for now! ^__^
Zav - Thanks a bunch, and thanks for following my Tumblr, too!
Eatoth - More character art and art of Penelope coming right up! Check my Tumblr for early sneak peeks! I am going to have her in today's post!
Aristocrat - Ha! I can see her selling luxurious dog houses! XD
Anonymous - Thanks so much!! I'm glad you enjoyed the story of Rioichi and the shark, hehe! ^__^ And yes, I will be updating with some geisha banners today as well! Thanks for asking!

These are great. I am impressed by the bath house floor plans. Very intricate. My favorite drawings, though, are the dragons and the samurai statues.

Oh! You're really amazing! Your drawings are beautiful. Congratulations! ^^

I will be looking forward to your next post. Thank you
theicechannel.com
hyoseki.com/

I think this article can be of the best help.
หวยรายวันนิเคอิ"
slot-online"